I hope everyone had a fabulous July. I apologize that you are reading this late. Due to unforeseen technical difficulties with my website I was unable to publish my blog. I am happy to say that I believe the glitches have been resolved. A huge shout out to Shayne Lawrence at Catch This Design Inc. for all her support and technological know how in resolving the problems. There is absolutely no way I could pursue my goals involving my website without her.

My website has become an extension of me. A place where I hope I can inspire you with the beauty of nature in the hopes of conserving it. A place where I can connect with you, for this I am extremely grateful.

Finally! Summer has arrived! It was a long snowy winter and a wet rainy spring. I am so ready to embrace the hot sunny Okanagan summer. There are so many fabulous opportunities to get outdoors. The hot summer sunshine brings me never ending moments behind the lens. Blessed with the endless possibilities of everyday adventures, I absolutely embrace all that summer has to offer.

As a result of our global pandemic much of our connections with friends and family has been minimized and our summer adventures have been altered. Our current conditions have created the ultimate opportunity to embrace the staycation, so that is exactly what I plan to do. I have been embracing every opportunity to enjoy the luxurious local landscape that surrounds me. As always, these excursions are based on low carbon footprint adventures. Hiking various ecosystems is my happy place, my connection to nature. Each location provides a stunning backdrop of varying forest flora and fauna, wildlife and breathtaking scenery. Alone, or with my family, each adventure provides a healthy outlet and rejuvenating experience for our mind, body and souls. Every time I walk away with the greatest appreciation for Mother Nature and I am immensely inspired to protect it. Every adventure encourages my goal of creating the ultimate e-card gallery for you. E-cards are the most viable way to stay connected while protecting and preserving our precious environment. This is my ultimate goal.

I hope you enjoy the new e-cards that I have added to the collection. Feel free to view my e-card gallery and browse. Choose from over 150 images to stay connected with family and friends. 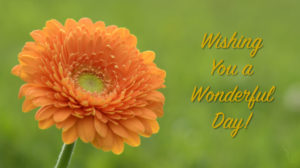 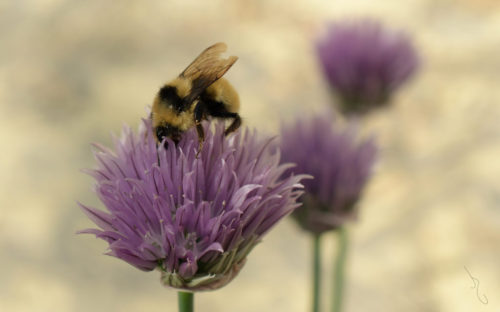 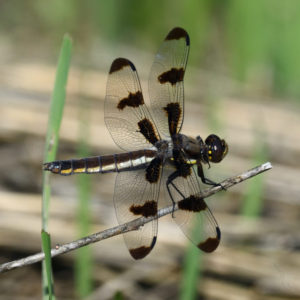 Red eyed beauty. Count yourself lucky if you spot this diving bird with its sleek long neck, narrow yellow bill and a unique black winged cap. Add on its signature brilliant red markings around its eyes and you will be sure you have found a Western Grebe. There are several species of Grebes. The Western Grebe (Aechmophorus occidentalis) is the largest and a true spectacle to be seen measuring about 64 centimetres in length and weighing up to 1.8 kilograms. They love to inhabit the salty ocean waters on the North American west coast where they winter.

Spring sends grebes migrating inland to the interior lakes to breed. The Western Grebe’s nests are a unique and particular construction. Nests are creatively built directly on top of open water on freshwater lakes. Lake selections are often bordered with, or contain, emerging vegetation which is needed to anchor their floating nests. Constructed mostly of reeds, cattails and other lake vegetation, the moving waters play havoc with these loosely assembled floating nests. As a result grebes are always busy at work continuously maintaining their nests. Eggs are laid and hatched on these floating nurseries. After hatching, you will find these chicks snuggled in amongst the feathers, riding on their parent’s back. While you may only see one, often there is another hidden amongst the feathers. I was truly blessed to see first hand the beauty of these young chicks. I also was blessed with what appeared to be a swimming lesson. Mom tilting her body and tipping her chick into the water. This resulted in high pitched chirping as the chick swam between both attentive parents. Soon the parents responded with their recognizable high-pitched “creek-creek”. This short lesson ended when the male assisted the baby back onto Mom’s back. It was an intimate and magical moment. While males are slightly larger than females, both male and female grebes have the same colourings and markings.

You may make a second glance when you see a grebe resting. Unlike most birds, they do not turn their heads back. Instead they uniquely fold their long delicate necks while keeping their heads forward. Their heads rest upon their back.

Since 1992, this species has been Red-listed in British Columbia. It is suggested that Western Grebes should be added under the Canadian Species at Risk Act. The delicate and intricate Salish Sea has reported a 50-90% reduction in wintering numbers. This area encompasses the network of waterways in the southern coastal regions of British Columbia, Canada and northern state of Washington in the U.S.A. Wintering numbers in California, U.S.A  have increased which may suggest that the colony populations are shifting south. Additional threats include predators such as gulls, recreational boating, loss of habitat and pollution.

While I was not there to observe the unique mating dance, I was there for a later showing of their incredible dance across the water.

Our world is full of magical moments such as this. I count my blessings that I was gifted with the experience and opportunity to share with you. 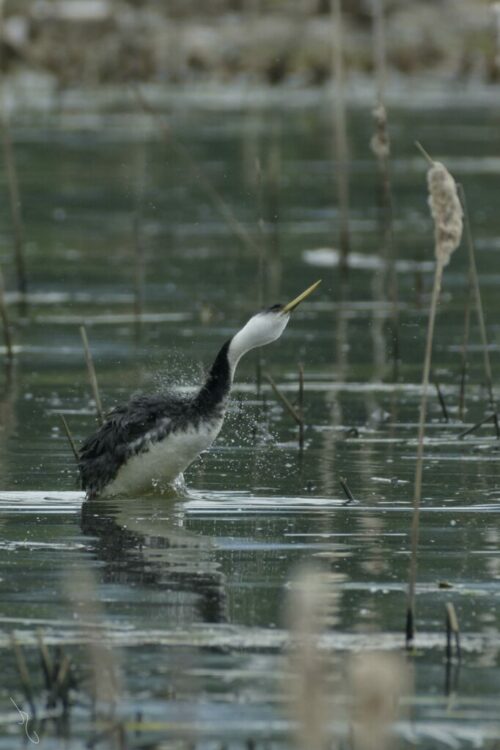 These images, plus additional images, have been uploaded to my Animal & Botanical Gallery on my website for full viewing. 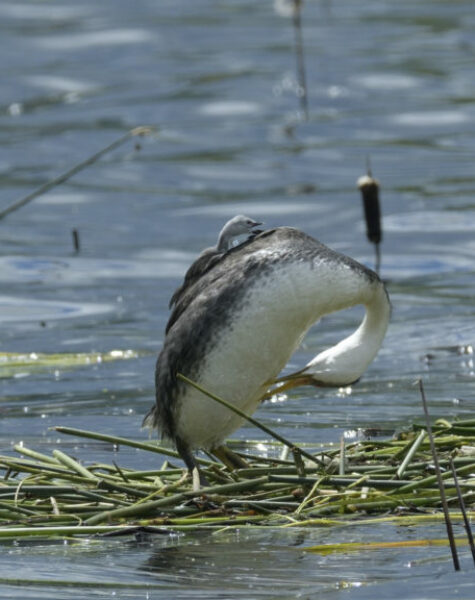 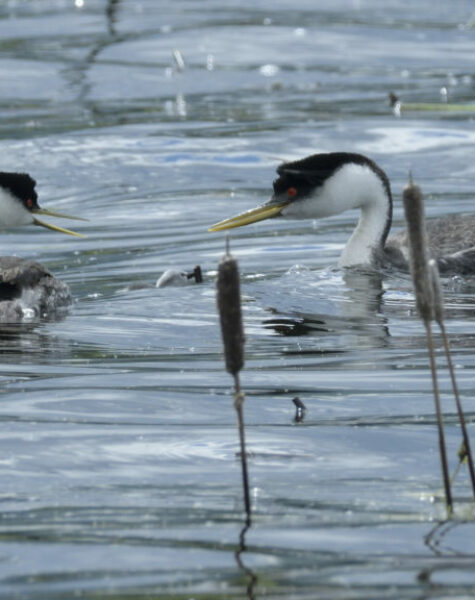 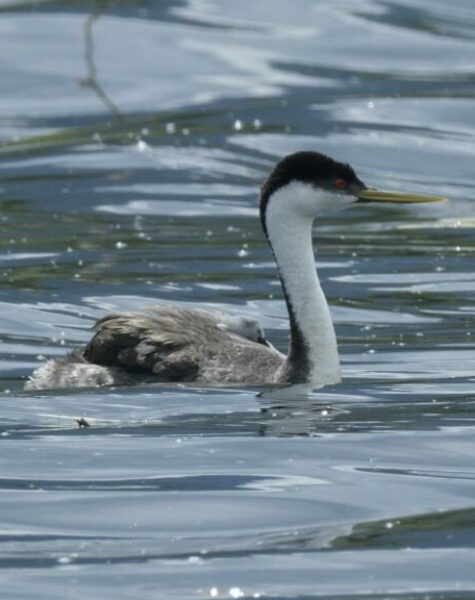 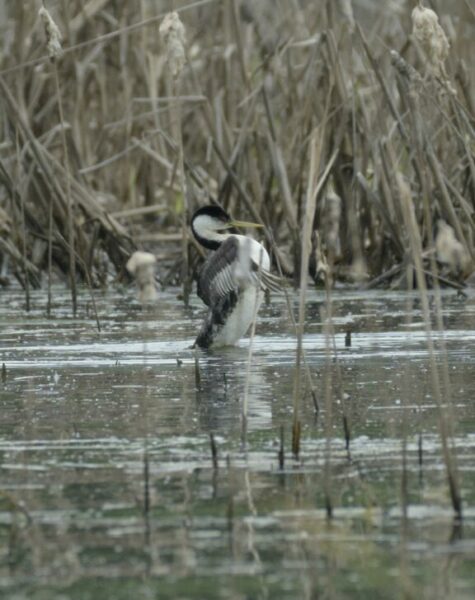 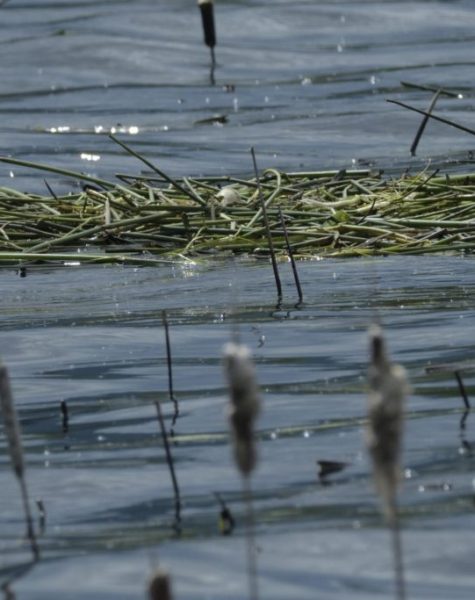 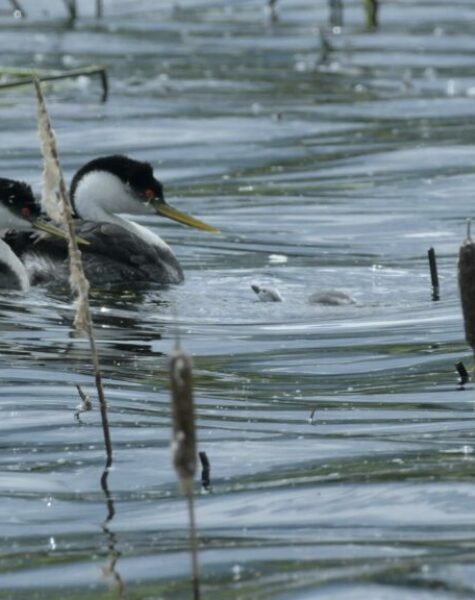 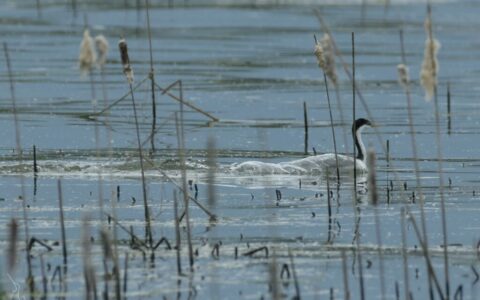 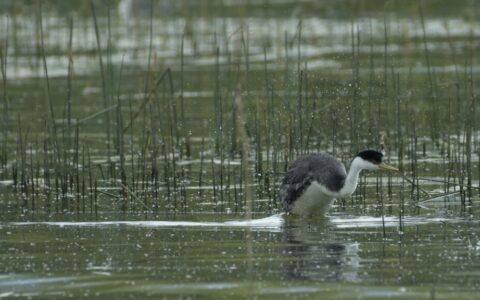 Thank you for taking the time to explore with me.